Looking for the best Italian gelato in Miami? Look no further than our South Miami family-friendly restaurant! Our love of modern Italian cuisine has taken us to Italy more than any other country and we’ve brought back our own twist on many Italian favorites, including gelato. As Top Chef Finalists, we are committed to bringing you the finest Italian gelato in Miami. You’ll want to try our Dark Chocolate and Caramel Sea Salt gelato to cool down in this heat. Our delicious Tahitian Vanilla and Sicilian Hazelnut versions will help bring down the temperature as well. As one of our favorite Italian treats, it may surprise you that gelato has a rich history!

The Brief History of Gelato

Gelato originated in Italy and its modern-day form is credited to Francesco Procopio Dei Coltelli. He created the first ice cream machine, opened his first cafe in Paris, and introduced gelato. He gained fame throughout Europe and eventually obtained French citizenship. King Louis XIV granted Procopio an exclusive license, making him the only producer of gelato in the region.

However, crushed ice has been consumed since 3000 BC! Years later, the ancient Egyptians would make a custom of offering guests a cup of crushed ice flavored with fruit juices. The Romans would begin the same custom using ice from the Etna and Vesuvius volcanoes covered with honey.

As the Italian renaissance emerged, the invention of gelato can be traced back to Bernardo Buontalenti. The Florentine artist and architect developed and presented a refrigeration method that was eventually introduced to King Henry II in France. It was later introduced to the U.S by Giovanni Biasioli in 1770 in New York. But when the hand crank freezer was invented and the industrial ice cream industry in the U.S. grew, gelato took a back seat. During this time, there were two types of gelato. Also known as Sorbetto or Sorbet, this type of gelato consisted of a combination of ice and fruit juices. The other type of gelato was made by combining milk, cinnamon, pistachio, coffee, or chocolate. Gelato didn’t gain mass popularity until the 1920s.

In 1964, Luciano Rabboni was working in his garage on new gelato flavors in the province of Reggio Emilia where he founded the company PreGel. The name is a reference to the production process that precedes the final gelato product. Rabboni continues to revolutionize the gelato industry with high quality and artisanal gelato. His award-winning gelato products have led to the expansion of his business to 130 countries around the world.

It’s safe to say that gelato has become a household item yet remains somewhat of a mystery. Those who love this Italian desert may not know how it’s made or what the word means. Here are 5 fun gelato facts you may not know about gelato: 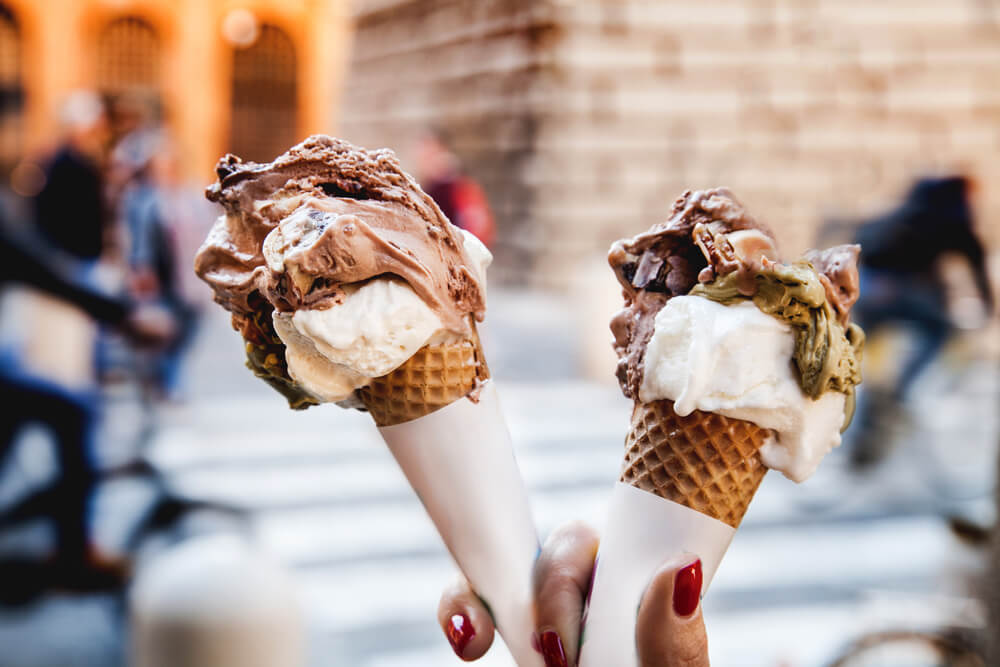 Make a Reservation for the Best Italian Gelato in Miami

We are ready to serve you our modern twist on authentic gelato! With so many delicious flavors, you can’t go wrong with our selection. While you’re here, you’ll want to try our other sweet treats like Tiramisu, made with espresso-soaked ladyfinger cookies, hazelnuts, and mascarpone mousse. You may also be interested in Spumoni Sundae made with pistachio and vanilla bean gelato, morello cherry granita, and chocolate-dipped cannoli.

Start your meal with our crowd favorites like Not Your Nonna’s Bolognese, made with slow-braised veal, pork and beef bolognese sauce, pappardelle pasta, local burrata, and basil. Other best selling dishes include Bucatini Carbonara made with crispy pancetta, parmesan cheese, English peas, and black pepper. Top your meal off with a refreshing spritz and sweet gelato! Make a reservation or order from our take out menu today!